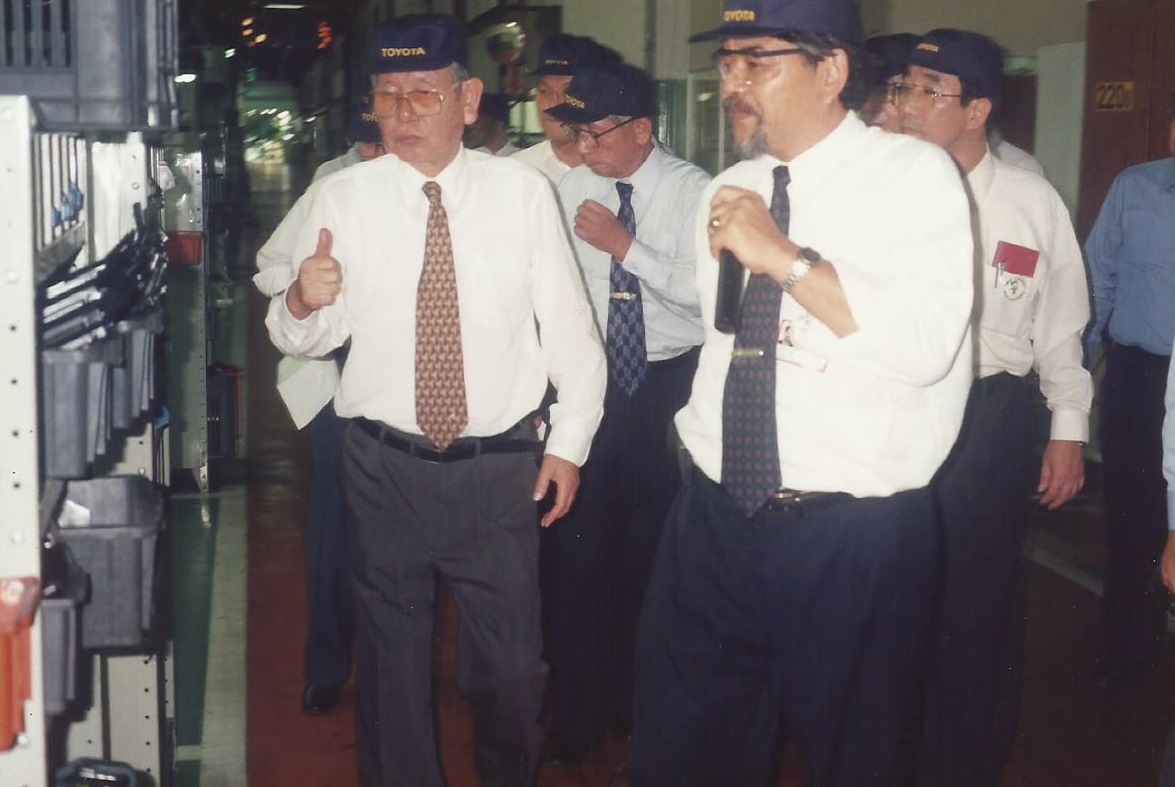 I started my professional career in 1968 at GMB engine factory in São José dos Campos, participating in the first GMB automobile project in Brazil, Opala. A few years later, from 1971 to 1973, attended the General Motors Institute (GMI, now Kettering University) in Flint, Michigan USA for further improvement in the field of automotive engineering. At the time, I observed the beginning of the “invasion” of Japanese cars in the American market: compact and low cost models with quality still to be tested and accepted by the demanding customer of that country. During that period, the world experienced the oil crisis. Then, I did not dream of being part of Toyota; was proud to be part of the world’s largest automotive industry conglomerate: General Motors Corporation (GMC).

In the following decade, GMB implemented two projects – Chevette and Monza – in which I actively participated in Process Engineering, including activities at the Adam Opel Project Center in Germany.

Interest in the Japanese industry

In 1984, GMC established a joint venture with Toyota Motor Corporation (TMC) in Freemont, California USA, forming the New United Motor Manufacturing Incorporated (NUMMI). As part of the agreement, GMC entered with a vehicle assembly plant that had been shutdown due to labor issues and TMC with management. Following a year of intense training with the workforce, a group of former GMC employees, the Freemont plant became benchmarking through implementation of the Toyota Production System (TPS). At the time I started my interest in the Japanese auto industry, but still did not think about Toyota.

The beginning of my Lean journey

A few years later, in 1988, I started my Lean journey with an interview on GMB plant with Professor José Roberto Ferro – who was then conducting research for MIT along with a group of the International Motor Vehicle Program (IMVP) – led by Professors James Womack and Daniel Jones. After five years of research in the global automotive industries, Profs. Womack, Jones, and Ross published the book “The Machine That Changed the World,” reporting that Toyota, amongst the various Japanese companies in the sector, had a different way of thinking and making vehicles. In that book Lean was born.

Admission to Toyota after 23 years at GMB

In 1991, I left GMB after 23 years of uninterrupted activity to join Toyota do Brasil (TDB) in São Bernardo do Campo. A decision that was not easy, but the desire to visit the land of my parents – Japan – prompted me to take this path. At the time, TDB was a factory with approximately 450 employees and produced only the Bandeirante Jeep, which was discontinued in 2001 after 43 years. A few months after joining Toyota, I traveled to Japan for an internship on TPS at Toyota’s headquarter.

On the first day of training, the plant manager introduced me to three books and asked which one I had read. The books were: 1. “Made in Japan” by Akio Morita, President of Sony; 2. “Way to Nissan”, whose author I do not remember; And 3. “The Machine That Changed the World,” by James Womack, Daniel Jones and Daniel Roos. I had read only “Made in Japan”, so his recommendation was to read “The Machine” and to present in two weeks a summary of the book in A4. From that reading I got to know TMC in more detail and its impact on the automotive world at that time, reported by academic researchers at MIT.

Training went thoroughly as planned, with much emphasis on kaizen activities and teamwork in the genba. We made several visits to suppliers to strengthen the concept of partnership in interdependent activities and also to work in team with them, both parts and components, as well as machines and tools suppliers. Regarding teamwork, I was impressed to see the involvement of employees on the shop floor while performing the tasks of the Kaizen Circle (KC) under the coordination of a leader. At the end of my 3-month internship, I had the opportunity to attend the annual KC’s event with the subsidiaries of the countries where Toyota had operations. It was a fine ceremonial with presentations of kaizens implemented by employees on the shop floor, recognized and commented by TMC directors. A well managed effort to value respect for the people who make the business thrive.

Rise in Toyota: the challenge of “learn by doing”

Back in Brazil in January 1992, a big surprise in my journey at Toyota: I was promoted to Supply Department Manager – a huge challenge for someone who had returned from Japan following an internship in various departments, all related to Production. With no experience in the commercial activity, my Director’s explanation was: “For the good of the company, you were assigned to be the Supply Manager. Learn by doing and taking good care of your subordinates.”

Following a year in the Supply Department, I was assigned to the Production and Planning Control Department. Two years later, for the Production Department. And then I was appointed Industrial Executive Director. In all these steps, the instruction has always been “to learn by doing.”

Improving TPS at the Toyota plant in Indaiatuba

Between 1995 and 1996, it was a period of great improvement in the learning of TPS, preparing the Indaiatuba plant to produce Corollas. At the time, three senseis from Toyota’s headquarter Operation Management Consulting Division (OMCD) were full-time at the factory teaching and perfecting the leadership on TPS. I was assigned to coordinate them, and personally, it was the best collective learning of the TPS in all my years at Toyota.

In the end of 1997, “Corolla made in Brazil” was launched (the country was the 16th to assemble the vehicle). A factory that was born small, but robust and with no idleness from the get go. We also have a lesson here: the plant was in full activity, conquering the Brazilian market and making profits from the beginning.

In 2004, I entered a new phase in my professional career. After retiring from Toyota, I was invited by Prof. José Roberto Ferro, president of the Lean Institute Brasil (LIB), to be Executive Director with focus on disseminating Lean Management in Brazil. During ten years at LIB, I had the opportunity to advise more than 100 companies in different sectors in Brazil and overseas – a very rich period when I could train leaders and teams on TPS and learn several production processes outside the automobile industry – in which I spent 37 of my 45 years of professional life.

Since 2014 I have spread the concepts of Lean Management in a method closer to its origin, which is TPS management. Along with my daughter Livia, we have worked in a pioneering way in agribusiness, a sector that I consider strategic in the country and which has great opportunities to “do more with less.” Another focus is the implementation of Kaizen Circle activities in companies with the purpose of stressing the importance of teamwork.

In the next columns I will share my experience gained and experienced throughout my lean journey as a consultant and sensei in the light of the Toyota Model.